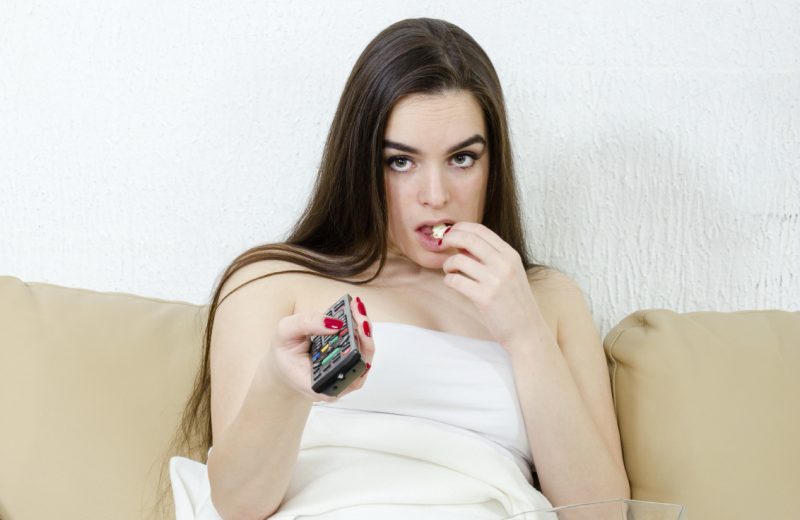 You wake up in the middle of the night to use the bathroom. Your throat is dry, so you get a drink of water. Then, you’re lying there in bed, trying to doze back off, but you can’t – you’re absolutely starving! The next thing you know, you’re gobbling down a bowl of ice cream or bag of potato chips.

We’ve all been there before. Yet, we also feel guilty about this late-night noshing, knowing that it’s probably no good for us. In fact, a 2009 study of rodents on the same high-fat diet – some fed by day, some fed by night – found that the night eaters gained 28 percent more weight. The good news is that getting better sleep at night may alleviate all this guilt and weight gain!

Why we crave junk food at night

A 2013 study published in the journal Obesity examined the sleeping and eating habits of 12 healthy, non-obese males in a laboratory over the course of two weeks. They found that, regardless of wake-up time and how much they’d eaten during the day, the volunteers were hungriest at night. Their desire for healthy vegetables remained consistent during the day, but their cravings for sweet, salty and starchy foods skyrocketed around 8 p.m., along with fluctuations in stress hormone (cortisol) levels. As The Atlantic explains, “Because we don’t need as much energy at night, cortisol levels decrease, telling our bodies that it’s time to go to sleep—when we stay awake, though, we’re driven to compensate for the resulting blood-sugar drop by eating food.”

Other studies have shown that the reward centers of sleep-deprived brains light up when pictures of junk food are viewed, and that there is reduced activity in the impulse-control / decision-making regions of the brain. But does that mean our bodies are set up for inevitable midnight bingeing?

University of Chicago researchers discovered that lack of sleep alters brain chemicals the same way as smoking marijuana. After several nights of poor sleep, healthy volunteers reached for snacks with twice as much fat than ones they favored after sleeping well for a few nights.

In the study published in the journal Sleep, 14 men and women ate identical meals at 9 am, 2 pm and 7 pm. After the fourth night, participants were offered a variety of snacks. The sleep-deprived binged on fatty foods in the late afternoon and early evening – even after consuming a solid meal. These volunteers measured 33% higher for endocannabinoid chemicals that increase pleasure felt while eating salty and sweet foods.

“We know that marijuana activates the endocannabinoid system and causes people to overeat when they are not hungry, and they normally eat yummy sweet and fatty foods,” said lead researcher Erin Hanlon. “Sleep restriction may cause overeating by acting in the same manner.”

Get a good night’s sleep with Mattress World Northwest

With 11 mattress store locations across the Portland metro, Mattress World Northwest is one of the leading suppliers of a “good night’s sleep” to area residents. Our small, family-owned franchise provides personalized customer service by highly trained Sleep Specialists who want nothing more than to help you beat your midnight snack cravings by finding you a better bed. We carry top brands like Sealy and Simmons that feature the latest technology to help you fall asleep quicker – and stay asleep. Whether you’d like soft-cushioned latex foam for better comfort, ventilation systems for a cooler night’s rest, or isolated coils to reduce motion transfer – we have it all. Stop by to see us!