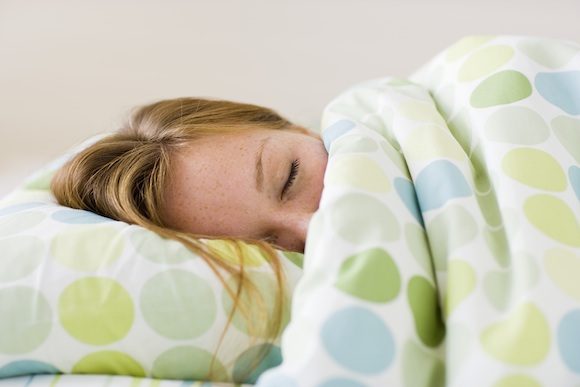 Watching television right before bedtime has become more common than ever for Americans, not only because the majority of people have TVs in their bedrooms, but also due to the popularity of online streaming sites like Netflix and Hulu. Binge-watching your favorite show when you should be getting your shut-eye could have a negative impact on your sleep and your health overall.

One of the biggest reasons to turn off the TV long before you head to bed is the effect light, even the dim light of the television, can have on your sleep. When there is light in the room, it affects the production of the sleep-inducing hormone melatonin. Less melatonin means it is harder to go to sleep, even if your mind knows it is bedtime. In addition, that extra light affects the part of the brain that controls body temperature and other natural functions that let us know the body is ready for a full night of rest.

If you are watching intense dramas or thrillers right before bed, the stress stimulated by those programs may make it difficult for our bodies to settle into restful slumber. When your brain starts working at an accelerated rate, due to your internal reaction to the show, electrical activity increases that is the opposite of what you need to prepare yourself for a full night’s sleep. The stress hormone cortisol is released in response to your body’s natural “fight or flight” response, which can actually delay sleep for a number of hours in some cases.

Multiple studies have linked television watching at bedtime to sleep debt, the process of not getting sufficient hours of sleep at night to feel fully rested during the day. Sleep debt is typically never paid back, since the majority of Americans sleep less than seven hours a night. Most of us need anywhere from 7-9 hours of sleep nightly to feel fully refreshed and recharged the next day. Some scientists have suggested that turning off the TV at bedtime is an effective first step in reducing sleep debt and increasing restful slumber.

Fatigue is not the only health byproduct of binge-watching television before bed. Many of us that stay up at night to catch our favorite shows get into the habit of snacking during that time as well. Research has shown that people that stay up later to watch television consume more calories at dinnertime and afterward than those that do not watch television all night. Eating later in the day has also been shown to contribute to an expanding waistline faster than eating meals at earlier times.

If you are staying up late to binge-watch your favorite TV series, you may not be as productive the next day as you would like. Studies have shown that people that go to bed after 11:30 have lower rates of productivity than those that go to bed earlier in the evening. The 7-9 hour sleep goal is also essential to ensuring you are at peak productivity levels throughout the following day.

Of course, one of the first steps to sleeping better (aside from moving the television out of your bedroom) is the right mattress. At Mattress World Northwest, we will help you shop for the best mattress for your individual needs and budget. Our professional staff is ready to help you get the full night of sleep you need to look and feel your best every day. Visit Mattress World Northwest, Oregon’s #1 seller of mattresses, to find the right bed for you.