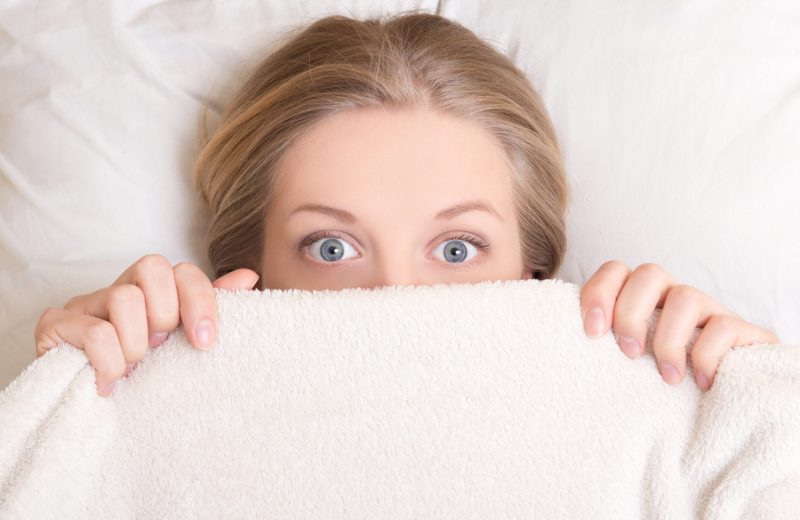 Have you ever had a nightmare that was so vivid that it seemed like you were awake and it was really happening to you? And, even more frightening, you were unable to move or speak?

This phenomenon is called “sleep paralysis” and it is a fairly common experience.

Normally the brain causes the muscles to relax and be still while sleeping so that the sleeper does not act out their dreams. This is called “atonia“. Sleep paralysis seems to be when this atonia occurs while a person is awake and actually aware that they cannot move. Researchers believe sleep paralysis is caused by a disrupted rapid eye movement (REM) cycle because it happens during either the phase of falling asleep (going into REM cycle) and/or during the phase of waking up (coming out of REM cycle).

Another way to understand this is to imagine that there are two mechanisms in the brain at play. One of them we’ll refer to as the “wake up” mechanism, and the other we’ll call the “dream on” mechanism. And, they are linked to one another. More specifically, the “wake up” mechanism’s job is to inhibit the “dream on” mechanism which is why your dream ends when you’re waking up naturally. However, if there is a problem with associated neurotransmitters, it may not be inhibiting properly and both systems may be turned on at the same time—so you’re half awake AND still dreaming! An episode of sleep paralysis occurs at the stage of sleep when our dreams are most vivid and the nightmare feels most real.

For centuries, sleep paralysis and the terrifying hallucinations and dreams that come with it were unexplained by science and led to some unorthodox theories. Cultures around the world have long believed that the paralysis was caused by demons, witches, or other supernatural creatures they saw and felt in a half awake but paralyzed state. People have described waking up and feeling a presence in the room, or feeling attacked by a demon but unable to move or call out, and even reports of being abducted by aliens. Today, science helps to explain that this is a merely a sign that your body is not effectively moving through the stages of sleep.

Research shows that the more serious problems with sleep paralysis, such as unusual frequency and terrifying hallucinations, are actually related to an underlying disorder that is the primary diagnosis and is interfering with sleep quality.

It is then the poor sleep that feeds into sleep paralysis episodes. When a person is having any sleep problems, it’s important to be aware of health conditions that can negatively impact sleep; to name a few, diabetes, menopause, stress are all known to infringe upon restful sleep. Be diligent in getting the proper diagnosis before getting treatment.

In general, episodes of sleep paralysis are not considered a serious problem and do not require treatment. However, there are things a person can do to improve their REM sleep quality. One remedy that is not always the first to come to mind, but is extremely significant, is the quality of your mattress. It’s a good idea to learn more about this very important solution to finding restorative sleep. Your health might be dramatically affected by your mattress in the way it helps or prevents your well-being. There are some other natural remedies to improve sleep, such as a hot bath before bed, or going to bed at night and waking up in the morning at the same time each day, or avoiding alcohol or sugary foods close to bedtime. However, all of these things wont matter if your mattress is a problem, so start there first!